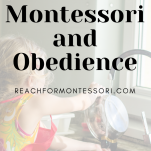 The Merriam-Webster Dictionary defines obedience as “an act or instance of obeying“. Many Montessori parents find the word obedience off-putting; believing that it implies an authoritarian approach to parenting.

This is not the case, however. Montessori and obedience are not in opposition.

Dr. Montessori wrote quite a bit about obedience, its progression, and its connection with independence. Self-discipline follows a certain progression that corresponds with obedience.

If you have ever had the chance to observe a Montessori primary classroom, you will notice the children are not unruly. They are busy at their work and when it comes time to obey a request of the teacher, they are happy to do it!

This may give some people the impression that the children’s natural urges have been suppressed somehow, or that punishment has taken place to achieve this behavior. In a proper Montessori school, this is never the case.

The children are following their natural urges and obedience is carried out with joy! This can be achieved in your home, as well, believe it or not.

Montessori and the three levels of obedience

The first level of obedience

This level of obedience typically is present up to the age of three. Children at this level have a hard time obeying unless the action being requested of them happens to be something they already want to do.

Under the age of two, obedience doesn’t come from any desire of the child, but from an adult’s insistence. After the age of two, children develop the ability to obey, but there is usually something in it for them

The second level of obedience

Between the ages of three and six, kids develop the capability of understanding and carrying out requests. Sometime between these ages, obedience often still does not come from any sort of self-discipline.

While they are beginning to understand the reasoning behind the adult’s request, for the most part, the child is obeying without any introspective thought.

The third level of obedience

This occurs between the ages of three and six, as well. This happens when self-discipline occurs. When a child is asked to carry out a task, they see the value in it and carry it out with pleasure. Dr. Montessori referred to this as “joyful obedience”.

At this stage, a child has developed greater reasoning skills. They now have the capability to consider the implications of their actions and how their actions affect themselves and those around them.

Every child will reach the “self-discipline” stage (the final level of obedience) at different ages in a Montessori environment. As you can see in the section above, children between three and six can be at either the second or third level.

How is obedience achieved in a Montessori home?

In order to assist your child in developing the “joyful obedience” and self-discipline seen in Montessori classrooms all over the world, the key lies in their environment and activities. Parents play an important role in this, as well.

While fantasy is not discouraged in a Montessori home, it is not encouraged, either. If a child is engrossed in imaginative play, that’s perfectly fine.

But parents should not lead in fantasy play, nor should they feed a child’s brain with stories of fairies and talking animals. It’s also one of the reasons television is discouraged until the end of the primary years.

Dr. Montessori believed fantasy play to be one of the causes of disorganized behavior and disobedience. (This is a point many Montessorians disagree on. While I personally don’t lead my children in fantastic play, I do read them/allow them to read storied featuring talking animals, etc. and I don’t find their obedience affected by this.)

A Montessori home should be peaceful and a child’s available activities should be organized and attractive, to entice the child to work with them.

Supplies for cleaning should be accessible to them and they should have access via low-hanging closet bars and dishes kept within their reach. Stools should be available to be moved around to help them reach things as well as to help cook and wash dishes.

Small furniture in their Montessori work area is important, as well. Having a child practice put the chairs at their small table in the right places without making any noise is a great, Montessori recommended, exercise.

You can also have your child practice setting his chairs in a row without scraping them on the floor or tiptoeing as quietly as possible across a room. These activities help your child appreciate a calm atmosphere, improve their focus, and develop the coordination needed to perform real-life activities.

The levels of obedience are moved via real things and tasks of real life. Inviting a child to set a table, prepare food, wash dishes, and fold their own clothes keeps their mind focused and helps the development of coordinated movements.

Patience and kindness from parents are crucial through these stages. “Joyful obedience” doesn’t happen overnight! It’s partially developmental but mostly brought on by being invited to be an active, important member of the household.

And remember, obedience comes from within the child.

Thanks for any other informative web site. The place else may just I am getting that kind of info written in such a perfect way? I've a mission that I am just now running on, and I have been on the glance out for such info.

The Planes of Development in Montessori — The Montessori-Minded Mom

[…] The first plane of development is when a child goes through the phases of obedience and will end up, through a proper environment and proper guidance, with joyful obedience and self-discipline. […]

Montessori Criticism: An Answer to the Critics — The Montessori-Minded Mom

[…] 5) Lack of discipline and structure is a common Montessori criticism. Dr. Montessori believed in allowing a child to go through the natural stages in order to reach self-discipline. […]

What is the Absorbent Mind? — The Montessori-Minded Mom

[…] This allows a child to choose activities of their own interest and at their own pace, without interference. A child may choose to paint, wash a table, and work with any material they choose. This freedom of choice lends itself to the development of self-discipline. […]

Does your blog have a contact page? I'm having trouble locating it but, I'd like to send you an email. I've got some suggestions for your blog you might be interested in hearing. Either way, great blog and I look forward to seeing it expand over time.

You can reach me at [email protected]