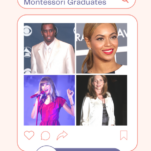 Whether the Montessori method is right or wrong for your child, it’s hard to deny that its alumni have gone on to accomplish some pretty impressive things. Check out these famous Montessori graduates, from world leaders to best-selling authors, business moguls, and even Academy Award winners.

“I like the Montessori method...it teaches through play. It makes learning a pleasure. It follows the natural instincts of the human being. The present system casts the brain into a mold. It does not encourage original thought or reasoning.”

When it comes to influential people in history, you may be hard pressed to find a more impressive list than this one. But if there’s one thing these people have in common, other than their famous Montessori alumni status, is that they were all self-directed learners.

If you have a favorite celebrity to add to this list of famous Montessori graduates, let us know and we will add them!