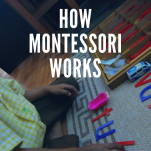 Montessori isn’t a salve you apply, a religion, or an essential oil. So, when I describe what Montessori is, it won’t be so simple. I’m going to hit the hot spots for you, though.

To summarize: The Montessori Method is an educational philosophy that was thought up during the late 1800’s and progressed well into the 20th century, and has stood the test of time.

Who was Maria Montessori?

To find out how Montessori works, we need to get to the root of the method and get to know a bit about Dr. Montessori and the time period she lived in.

Maria Montessori was the very first female doctor in Italy. She overcame many obstacles common to her time to achieve this. In the 19th century, women were discouraged from studying science in favor of languages and literature.

Montessori used her determination and plowed through the obstacles to become a physician.

It is recorded, that on the walk home from a lab study one evening, she came across a woman begging for money in the streets with her younger toddler. She observed that the little one was completely absorbed in playing with a small scrap of paper.

It’s there and then that the seed was planted.

Soon after this encounter, Montessori began studying pediatrics and worked in different psychiatric hospitals, including a pediatric facility.

She studied some of the founders of modern psychology, such as Itard, Froebel, as well as many others. She was quite well studied in psychology for being a trained surgeon!

If you are looking to separate the Montessori way of learning from the traditional Western methods, there is a simple explanation.

A traditional classroom is centered around the teacher, and in a Montessori classroom, there is no single center. Each child is the center of their own educational experience.

The materials the children work with have a built-in control of error, allowing for independent learning. The children are allowed to pick whatever activities in which they have an interest.

The teachers, referred to as “guides”, are tasked with preparing the classroom environment, observing each child, and presenting activities and materials as needed.

In a traditional classroom, the children sit at desks and the focus is on the teacher. Much of the learning is rote…the teacher talks, the students listen and do as instructed.

Lesson plans are centered around state testing schedules and children are all expected to progress at the same rate.

In a Montessori classroom, you will find teachers (or guides as they are called) roaming about the room attending to individual children, giving demonstrations in small groups, taking notes, or just sitting and observing.

You will also find mixed age groups in Montessori classrooms. This works well because the younger students get to look ahead to what they will be able to do in the future, and the older students get to assist their younger peers in activities they may be struggling with, thereby strengthening their skills.

How else is Montessori unique?

A unique aspect of Montessori’s method is the focus on the interconnectedness of everything in the universe. It’s referred to as “Cosmic Education”. I know that sounds like some hippie mumbo jumbo, but it’s actually pretty common sense.

Cosmic Education is basically helping children think about how their actions affect things and people around them.

For example, instead of teaching a child proper handwashing for the sake of having clean hands before a meal, a Montessori guide would pose a question to the child following the activity, such as, “How do you think keeping your hands clean helps other people?”.

Questions like this help children develop both empathy and critical thinking.

Montessori teaches children that every living being in the world is interdependent. That is quite unique!

“We discovered that education is not something which the teacher does, but that it is a natural process which develops spontaneously in the human being” -Maria Montessori

Why is Montessori better?

The answer to this question is actually quite simple. Dr. Montessori made great observations about how children’s minds work. Essentially, she observed that children want to do things on their own and learn using their bodies.

Traditional schooling focuses on grades, test scores, and other outcomes. There is no attention paid to the joy of learning, a child’s individual interests, and independence in learning.

Traditional schooling typically prepares a child for the next level of schooling. We have all observed the lack of preparation for life outside of school in our surrounding communities!

There is no encouragement for the enjoyment of learning. Children just memorize what they need to in order to make passing grades.

This bleeds into adult life in both subtle and catastrophic ways.

The early years in Montessori education focus on Practical Life activities. (Activities of daily life.) These activities encourage independence and help concentration, among other things. So, Montessori starts preparing children for independence right from the start!

Montessori, likewise, works by giving children activities that can be done independently, activities that focus on the five senses, work the body and mind simultaneously, having mixed-age classrooms, and by focusing on the planes of development

This is just a brief summary of what Montessori is and how it works. I find the story of Dr. Montessori’s life and the beginnings of her method are truly fascinating.

Whether or not you believe that Montessori works, I encourage you to read Maria Montessori: A Biography (Radcliffe Biography Series)

The woman was incredible.

Think about your own experience in school.

As always, feedback is welcome!

30 thoughts on “What is Montessori?”