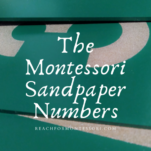 Montessori math sets itself apart from traditional methods with its methodical introduction of hands-on materials. The Montessori Sandpaper Numbers are one of the first math materials a child will work with and are a great example of the Montessori method of sensorial learning.

In this article, you will learn what the Sandpaper Numbers material is, its purpose, as well as how to introduce it to your child.

You will also get ideas for activity extensions that can be done with this material.

(This post contains affiliate links. Purchasing from these links costs you nothing extra, but helps with our website upkeep.)

What are The Montessori Sandpaper Numbers?

Sandpaper Numbers in Montessori is a math material made up of 10 smooth wooden cards with the numbers 0-9 impressed in rough sandpaper.

There is sometimes a dot placed at the ends of each number to show children where to begin and end tracing, however, this is not common or necessary.

Sandpaper Numbers are used to give children a tactile impression of the written representation of quantities as they trace the numbers with their fingers. This helps children develop muscular memory in preparation for future writing as they learn their numbers.

It also promotes a deeper understanding and connection to the written symbols they will be using to compose quantities.

The zero Sandpaper Number card is used with the one card to represent the number ten. It is also used later for activities that introduce the concept of zero, such as the Zero Game.

Note: The Sandpaper Numbers are introduced to the child as a 3-period lesson.

The Sandpaper Numbers should be introduced 3 at a time and on separate days. After the 0-9 number cards have been worked with, the 1-card and the 0-card are placed side by side to form the number 10.

Using 2 sets of Sandpaper Numbers, ask the child to match them in pairs.

Lay out the Sandpaper Numbers randomly on a floor mat and invite the child to put them in order from 0-9.

In a room with a calendar, book, magazines, or other items featuring numbers, ask the child to go around the room and point out any numbers they find.

Have the child trace numbers with the finger in a salt, cornmeal, or sand tray. The child may also enjoy tracing numbers in the air with their finger or even using their whole arm.

Using playdough, scraps of paper, legos, or any other material you have on hand, invite the child to form numbers.

Order the Sandpaper Numbers on a large work mat on the floor and sit with the child across the room. Call out numbers, one at a time, at random and ask the child to bring you the correct number card.

When the child has mastered this activity, the numbers can be scattered in random order on the rug prior to the start of the game.

Invite your child to close their eyes or apply a blindfold if desired, and hand them a number card. Let them feel the number and try to guess which number card they are holding.

Sandpaper Numbers are such a simple item, however, they are effective in helping children understand numbers, and they are used in so many ways in early Montessori math.

Have you introduce Sandpaper Numbers in your home? If so, have you come up with any creative activity extensions or games you would like to share?