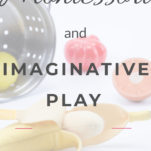 There are varying perspectives on Montessori and imaginative play, even from Montessori professionals. Even Dr. Montessori‘s ideas about a child’s imagination evolved over the course of her career.

You may have heard that Montessori discourages exposure to characters and instead encourages young children to engage in “work”.

This gives many the impression that children who attend Montessori school, or are being raised with Montessori in mind, are discouraged from using their imaginations.

These misconceptions seem to stem from a lack of differentiating imagination from fantasy. Imagination and fantasy are not the same things, even though they are related.

The confusion about fantasy and imagination is pervasive and quite noticeable in even expert analysis of childhood development.

Search engines will take you to numerous articles claiming to outline the importance of fantasy play for children only for you to realize what they are actually referring to is children’s imaginative play scenarios unrelated to fantasy.

Imagination is defined as, “power of forming a mental image of something not present to the senses”. This means that imaginative play comes from ideas of a child’s own creation.

Until unrealistic concepts like fairy tales and magic are introduced, children’s imaginations are based on reality.

Imaginative play is vital to a child’s development. It’s how children make sense of the world around them.

Kids are keen observers of the activities in which adults around them engage. They test theories and develop abilities by imitating our actions and applying those actions to different scenarios.

Fantasy is an impractical offshoot of the imagination. These are impractical concepts children do not typically come up with on their own.

Children are most often introduced to these fantastic ideas by adults, peers, and different forms of media. They are not reality-based and are not typically a creative production of a child’s imagination.

Before the age of 5 or 6, during the first plane of development, children have difficulty distinguishing fantasy from reality.

There is nothing inherently wrong with fantastic play, but introducing fantasy before a child knows that these scenarios are impossible can alter the way he plays, interfering with normal imaginative/observation-based play.

So, where does pretend play fit into a Montessori upbringing? Let’s look at how Montessori and imaginative play peacefully coexist.

Dr. Montessori’s writings are often taken out of context by those unfamiliar or opposed to her methods.

Dr. Montessori observed that children were drawn to activities of real-life as opposed to toys and stories of fantasy.

She saw that young kids got joy and satisfaction from performing tasks such as cleaning tables, gardening, and preparing and serving meals.

This is something parents and caregivers witness on a daily basis; young children asking to participate in household tasks. Montessori supports a child’s natural inclination to perform real tasks by introducing Practical Life Activities.

Dr. Montessori’s take on real experiences vs pretend have been backed by research.

In a study conducted, children, particularly those between the ages of 3 and 6, showed a tendency toward real-life activities as opposed to pretend alternatives. These children provided the reasoning behind their choices.

• When given a choice, preschool-age children overwhelmingly preferred real activities to their pretend equivalents.

• Children’s preference for real activities appeared between and 4 years, then was constant through age 6.

• Children said they preferred real activities because they are functional, useful, and provide novel experiences.

• When children preferred pretend activities, the most-cited reasons were being afraid of the real, lack of ability, and lack of permission.

The children who chose the pretend activities did not do so because there was an innate preference for pretending when given a real experience as an option.

We see now that children would rather have real experiences. This does not mean there is no room for children’s imaginative play, however.

Dr. Montessori took a stance against adult-led play and the introduction to fantastic ideas to young children (also adult-led), but the bulk of her texts are not anti-imaginative play whatsoever.

Montessori does not discourage playing pretend. The philosophy simply promotes connection to reality; children are allowed and even encouraged to use their imaginations during work activities and free time.

In Montessori, a child’s imagination is allowed to blossom naturally and fill in the gaps left by a world they don’t yet understand without the influence of adults via fantastic stories and the introduction to prefabricated characters.

Whether is process art happening in an art area in a Montessori home or the Brown Stair and Pink Tower being used together in a creative new way, children’s imaginations can be observed flourishing throughout Montessori environments.

She simply objected to fantastic and imaginative play as a primary method of education. An example of this would be Waldorf.

(Some of Montessori’s writings were time and situation-specific. I did not include quotes or ideas of hers that would confuse the issue.)

*Later in her career, Maria Montessori admitted to not having intense feelings against fantastic play. She did not see imaginative play, of any sort, exceedingly detrimental, as long as it was balanced out by real experiences and caregivers facilitated helping children understand the difference between fantasy and reality.*

Pretend play in a Montessori home

Small functional kitchens are optimal, but having a pretend kitchen for your child, complete with Melissa and Doug play food, does not violate any sort of “Montessori Code of Regulations”. (There is no such thing.)

In fact, toy kitchens can be Montessori-aligned whether they are used for food preparation or playing pretend.

This is because all a child needs to engage in constructive imaginative play is experience with the real version.

If you involve your child in cooking, or even just let her sit close and explain to her the steps, she can then use that experience in her play kitchen to create and build on through her imagination.

Toy kitchens and other pretend items are also useful for homes wherein participating in the real activity is not an option, or not an option often.

Pretending to prepare food, bathe a baby, or hammer nails for construction should be perfectly acceptable in a Montessori home.

Children, as shown in the cited research, back up Maria Montessori’s assertions that real-life activities are preferred over playing pretend. Montessori and imaginative play do coexist peacefully, however.

If you do Montessori at home, do you include fantasy? Why or why not?

Great read. We practice some Montessori practices in our home.