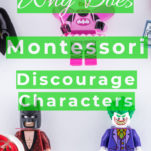 Why does Montessori discourage characters?

Many parents don’t have an issue with exposing their children to characters, maybe even most parents. There are some pretty great reasons to avoid it, though.

Gender and race stereotypes in characters

You may have noticed a recurring theme, especially in fairytales; the beautiful damsel in distress and the handsome, masculine hero. Throughout children’s literature and movies, women are helpless and men are stoic saviors.

Not only are these themes not truly representative of genders, but they cause actual harm. Exposing children to these themes shows children that traditional Western roles are desirable.

This is harmful for all genders and has contributed to pervasive toxic masculinity. It has also been stifling to the female gender, as many young girls are shown that “true love” is the ultimate goal and they are weak and waiting for their own “Prince Charming”.

Professional, personal, social, and financial success is rarely portrayed as a goal. This is particularly true of female characters.

When a female that does not conform to Western beauty standards is portrayed, she is a witch, an evil-stepmother, or she’s simply not a main character.

Along with these gender stereotypes, are racial stereotypes. When People of Color are represented, which is not nearly often enough, they are assigned minor roles and and given stereotypical personality and physical traits.

The use of AAVE (African American Vernacular English) is typically assigned to Characters of Color who are laborers or who have accompanying traits meant to lead the reader or viewer to assume they are not intelligent. This plants the seeds in children’s minds that the use of AAVE is a sign of unintelligence.

This is harmful for Black children, as they may develop assumptions about themselves or people around them that use this vernacular. It also leads to prejudice towards People of Color by non-Black viewers or readers.

Characters of Color are also written as being loud, obnoxious, and sassy.

Even in media wherein characters are represented as animals or other non-human beings, these stereotypes are still present. This is true for both racial and gender stereotypes.

These stereotypes are harmful for every child, no matter the gender or race.

Gender and race stereotypes reveal themselves once again in the careers of characters. You are more likely to find female characters as caretakers and kitchen workers than you are to find them as laborers or in management roles.

Male superheroes are not only overly masculine, but they are usually highly successful in their day jobs, as well. This professional success is not typically assigned to female characters, even superheroes.

You will be even more hard pressed to find Characters of Color in management positions, female or male.

Another career stereotype is police officers always being infallible and always being good people. This is harmful because it causes white children to grow up with a bias toward law enforcement, leading us to dismiss the widespread complaints against them from Communities of Color.

Paw Patrol isn’t the main offender, either. This stereotype can be found throughout children’s books and films in more subtle ways.

Before we answer the question, “Why does Montessori discourage characters?”, let’s touch on one more item.

The lack of diversity and the stereotypes don’t stop at race and gender. There is a marked lack of characters representing neurodiversity and a diversity in physical ability, as well.

When a character does display traits of neurodiversity or a physical impairment, it is often the defining feature of that character.

For example, in the movie “We Can Be Heroes” (2020), the one juvenile superhero cast in a wheelchair is called, “Wheels”. His superpower is zooming around in his wheelchair.

Showing children they should be proud of their assistive devices is one thing, making the it their defining feature is another.

Diversity when it comes to neurodiversity is so sparse that I have no examples on hand.

Representation matters in this arena for the same reasons as with gender and race. It’s harmful to everyone when everyone is not adequately represented.

Why does Montessori discourage characters?

Many parents choose to restrict their child’s exposure to characters for reasons other than, or in addition to, the aforementioned, though. Parents sometimes start as early as infancy, by discouraging the use of stuffed animals.

Research shows that very young children are not capable of distinguishing fantasy from reality. This capability is said to show up in the majority of children around the age of 5.

Problems arise when children are exposed to fantasy during the first plane of development before they fully understand that it’s not real.

Before the age of 6, children are in the stage of development known in the Montessori community as the absorbent mind. Children at this age are like sponges, absorbing information around them and applying it to the world in ways that make sense to them.

An increase in violent behavior in young children directly corresponds with the rise of screen media. Characters in media, both on screen and in books, often have attributes and capabilities that are improbable, typically impossible.

Introducing them to certain fantasy concepts can be confusing and sometimes harmful to young children. Introducing children to characters before they are able to understand the difference between fantasy and reality can cause:

Montessori does not discourage imagination or fantasy, though. This is an extremely popular misconception that turns many parents away from the Method.

Children raised with Montessori in mind apply their own imaginations to real life situations. Any fantastic play in Montessori is of a child’s own making and not mimicry of something they have read or seen on TV.

In conclusion, there are some pretty great reasons parents discourage characters for their children. While fantastic play is important for children, characters are not.

4 thoughts on “Why Does Montessori Discourage Characters?”