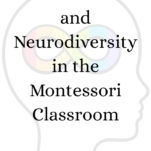 Normalization and Neurodiversity in the Montessori Classroom

This article will examine how the Montessori classroom effectively supports the social, emotional and learning needs of a wide variety of students, and how the inclusion of all students is normalized.

The premise behind the Montessori environment has always been individual education, based on the child’s needs and their interests, tapping into what fascinates them and supporting them to extend their learning through practical hands on learning.

Normalization to the Montessori environment is spoken of frequently, and it essentially boils down to the children accepting and becoming used to the presentation of materials and the style of learning in the classroom.

However, I think there is another important aspect of Normalization that is sometimes overlooked, something more at the core of the tradition of Montessori.

Neurodiversity in the Montessori Classroom: Freedom of movement

Within a Montessori classroom, things look different from a mainstream class. There are several key differences which really support nuerodiverse student to feel both comfortable and accepted in the environment.

Firstly, in a Montessori classroom, students are permitted freedom of movement, within limits.

Obviously this doesn’t mean they are free to get up and walk out when they are working, or run around the place disrupting others. But there is an inherent movement and flow in the room.

People are not sitting perfectly still, behind small desks, all in rows. At its core, this is so fundamentally important to children who have sensory or movement needs.

My daughter is nearly nine years old and recently her psychologist visited her Montessori room for an observation.

Her focus was on the level of anxiety that was portrayed by my daughter in the school environment, compared to how it had been the year before in a Mainstream in which she had presented with a great deal of emotional dysregulation and anxiousness, manifesting in disruptions to the class and her learning.

One of the things that was commented on was the fact that being able to move around and work in different environments such as on the floor, outside in the garden, standing at tables or tucked away in her own corner, gave her a freedom that reduced her anxiety significantly.

She was able to stop what she was doing and stretch or move if needed, she was able to meet her own sensory needs which gave her greater focus and much less stress.

She didn’t feel the pressure of needing to “stay in her seat” while also trying to concentrate on the work she had been assigned.

It was noted that the most important aspect of this was that she wasn’t the only student who needed to move and sit in different ways.

That is just part of the practice of the classroom. Students are encouraged to decide where they would like to work and how, because they know themselves best.

No one stands out as “different” or “strange” for wanting to work on the floor, where as in a Mainstream classroom, the options for this kind of thing are limited by space and the system.

That’s not to say that Mainstream teachers never allow students to work on the floor, but the majority of their time is spent at their one specific desk, which my daughter found confining and stressful.

When her sensory needs are not met, her regulation is out the window, and that is a recipe for disaster.

No learning takes place with a dysregulated child.

Normalization and Neurodiversity in the Montessori Classroom: Mixed ages and interests

This leads me back to another fundamentally vital thing which the psychologist highlighted to me when she was discussing her observations.

The students in a Montessori classroom do not view the child who needs to move around a lot, take a sensory break, work to their own schedule as anything “different”.

Everyone in a Montessori classroom has their own work plan, their own learning agenda.

They all have their own interests, their own skills that they wish to peruse and because of that independent and individual focus, the students do not judge the level of their peer next to them.

Montessori inherently removes this element, which is heavily in play in Mainstream classes. To the extend that some classrooms even have displays where the children’s names are placed depending on their level in certain curriculum areas.

In a typical year 3 class, there are perhaps twenty five to thirty students, all working on the year 3 curriculum, all expected to reach the same goals.

If a student requires further support, or needs to have a individual education plan highlighting their goals for a different level to their peers, it is rather obvious to the other students that they are not working on the same thing as everyone else.

In a Montessori room, there are a spread of ages and year groups, there are materials to support learning in every aspect of the curriculum, which can be extended and simplified as needed by the student so that they can work on what they need to learn.

This means that while one student is working on the grammar symbols, their peer beside them maybe studying the checkerboard for math, or working on geography. No one stands out as being “different” because they are all inherently individuals.

This is why inclusion is so important. Every school will have an inclusion policy, and within Mainstream, they do what they can to ensure that all students feel accepted and welcome within the classroom.

The difference in Montessori is that it is inbuilt. No one has to “try” to include the students who have differing needs to the majority, because everyone is already doing their own thing, and there is not a focus on the level of their knowledge and understanding.

Obviously it is not always the case that everyone is doing their own thing, and there are times when everyone works on the same thing, at the same time. However, at that point if a few students are needing something different, the others will not think it odd.

They are used to people working to their own schedule, identifying their own needs and attending to individual foci. This freedom to accept that everyone is different and that is to be celebrated, not seen as something strange, is the beauty at the heart of Montessori.

Additionally, within the environment, the process of working can be between peers, as well as with adults.

So while a teacher may present a lesson on a certain material that they know a student has yet to master, the children often will work with each other.

A student may instruct and assist another, thus cementing their own understanding and also reducing the stress that can come from being in an environment of instruction.

My daughter sometimes finds it intimidating to have a teacher giving instructions, for a range of reasons.

In a Mainstream she was often expected to sit on the carpet and listen to a model of how to do something with an extended amount of instructional time.

As someone who struggles with auditory understanding and focus, the experience was difficult to say the least.

Support for neurodiversity in the Montessori classroom is provided in this aspect.

In Montessori, her instruction is in a small group, or 1:1, or even offered by a peer instead. The stress level is greatly reduced and her ability to listen and attend increased by this style of learning.

Some students have a great deal of anxiety when it comes to school. This is caused by so many aspects, but for a neurodiverse student, their own interests are very often not acceptable, and not catered to.

In Montessori, things are different. Therefore a student who has an intense interest in something specific- animals, vehicles, whatever it may be, has the opportunity to become an expert in the field and utilize their interests in their own learning.

These elements of their fascination are celebrated by their peers. If they are particularly good, or interested in one aspect of education, they can be the one who teaches it to other pupils.

They are given time to focus on what they want to learn, uninterrupted.

Another aspect of neurodiversity in the Montessori classroom is children’s well being is supported. The teaching of emotional regulation and the openness with which feelings and interactions are presented to the children.

Problem solving as a group, with or without an adult’s guidance is a fundamental part of the Montessori curriculum.

Teaching peaceful behavior, conflict resolution, and emotional identification and understanding is a huge part of encouraging all children to become kind, peaceful people capable of friendships.

This is sometimes particularly useful for students with additional needs, as emotional understanding and regulation often pose difficulties.

Having staff who are trained and dedicated to peaceful teaching, without negative sanctions, allows the students to explore uncomfortable emotions more freely and easily. Neurodiversity and Montessori blend well this way.

Practical life is often completely overlooked in mainstream environments. With the exception of cooking, which is sometimes done, there is not a great deal of practical learning experience offered.

The reason I mention this in this article is because of the importance of these skills for nuerodiverse pupils, who may require explicit instruction in these areas.

My daughter has executive functioning difficulties, and practical life skills are important to assist her in organizing and completing tasks.

Additionally at her school they have an extensive gardening program as well as Forest Schools, which offer excellent additional learning opportunities about the world.

For many pupils in Mainstream with additional needs, they are not provided with the chance to learn things like setting a table, cutting up and serving food, cleaning and caring for your environment, but these elements will be very important to them in their future and need to be taught.

I have seen this kind of instruction in Special Schools, where it is valued, and it is so important for students to have these opportunities.

Beyond any academics, the reason we are so pleased to have our daughter in a Montessori classroom is the change in her happiness at school.

She has come from being incredibly anxious and resistant (even with the excellent teacher she had in Mainstream) to being enthusiastic and relaxed in an environment where she feels safe and accepted.

In her classroom, there are students with a spread of ages, a wide range of cultures and religions, a mixture of diverse learning needs and personalities, and they are all accepted, normal and welcome.

Beyond normalizing the work and the style of learning in Montessori, normalizing the range of people in this world is vital to the growth and development of well rounded students, and people.

They will run across all kinds of individuals in their lives, and having become used to everyone having differing needs, interests and experiences can only assist in creating a peaceful world, with less prejudice and fear.

For more on Montessori and special needs:

Dan Bradley has been a teacher for ten years, mostly working in Learning Support Units and Special Schools, both the UK and now in sunny Australia. Also a parent to an eight year old daughter with ADHD, Dan has a wealth of experience in raising a small human with additional needs in a Montessori inspired home, focusing on gentle and attachment parenting ideals. Dan is an avid writer and artist and really enjoys spreading creativity in the classroom and the home as much as possible!