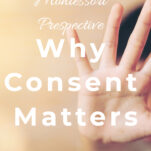 If you are new to Montessori, then the concept of consent and why consent matters may not be something you have given a great deal of thought to, at least in terms of your parenting approach.

On the other hand, you may be familiar with the Montessori perspective on consent, but you could still be struggling with precisely how to incorporate the principles into your daily routine at home.

Either way, you’ve come to the right place. In this article, we’ll dive into just what consent means when it comes to raising children, its importance, and how to apply lessons of consent in a practical way.

What Is Consent Exactly?

In today’s society, we tend to think of consent in a sexual context, but this is only a small (albeit important!) part of what consent actually means.

According to Merriam-Webster, the term consent means “compliance in or approval of what is done or proposed by another.” Thus, to consent to something is to simply give approval of an action or behavior.

In more mainstream parenting circles, the concept of consent is almost foreign. The truth is that many moms and dads in our society don’t think a young child is capable of giving consent, nor do they believe it is necessary for a child to grant consent to a parent.

Unfortunately, a lack of consent in a parent-child relationship undermines the level of respect that exists in the relationship, especially respect towards the child.

This could cause a host of problems down the line, including a loss of the child’s self-respect.

Moreover, children who don’t feel respected at home will often lash out at others and may mimic the disrespect they felt growing up. It can become a vicious cycle, but one that can be avoided entirely through a respectful parenting approach.

Consent in Montessori: What it means and why consent matters

At the heart of Montessori is the issue of respect. In fact, you would be hard-pressed to identify a Montessori principle or approach that can’t be traced back to this all-encompassing concept.

Respect is truly at the core of everything that takes place in a Montessori environment, whether it be the household or classroom:

“Children are human beings to whom respect is due, superior to us by reason of their innocence and of the greater possibilities of their future… Let us treat them with all the kindness which we would wish to help to develop in them.” – Maria Montessori

In order to appreciate the concept of consent as a parenting principle, it is crucial to understand and acknowledge that even the youngest of children deserve respect.

Consent, then, is one way of showing respect towards the child and in turn, teaching them the importance of respecting others.

Teaching and Modeling Consent When Parenting

The concept of consent is a fairly easy one to grasp, at least in theory. With other adults, it’s crystal clear, but when caring for young children, teaching and modeling consent can get a bit tricky.

How do you empower a child to say “no” to things they don’t want to do when you need them to comply with basic tasks like grooming or eating, for instance?  It is a fine line to walk, and the journey can be downright frustrating at times.

While there is no blanket answer that will cover you in all situations, there are some general guidelines you can follow:

Usually, when parents think of asking for permission, they imagine their children asking them for a treat or special privilege. In Montessori, however, you’re more likely to witness a parent asking the child for permission.

While it may sound like the tail wagging the dog, asking permission from your children is actually a powerful gesture of respect that teaches and empowers children to be independent and have a strong sense of self-respect.

If you’re unfamiliar with the concept of asking your child for permission, you can start small by asking them things like:

Newcomers to Montessori are often surprised to find that children are much more agreeable when they’re asked for their consent rather than commanded to engage in a task.

When honoring the concept of consent in your family, it is important that moms and dads avoid forcing a child to comply with a task or behavior if they’ve expressed their desire not to.

However, that doesn’t mean that parents can’t use their powers of persuasion to convince a child that the behavior is a desirable one.

In fact, it’s a parent’s job to demonstrate to children the importance of self-care, including brushing teeth and hair, bathing properly, and eating healthy foods. Through persuasion and modeling, eventually the child will want to do these things on their own.

One of the best things you can do when embracing the idea of consent in your home and family is to give your child choices. This is a proactive way of empowering your little one to take control of his or her path.

Remember, independence is the ultimate goal here! By giving children options, we are demonstrating respect for their preferences while still providing helpful boundaries that protect their safety and wellbeing.

Opportunities to provide options abound throughout the child’s daily routine, including where to eat breakfast, when to go outside, what to eat for snack, and of course, which learning activities to engage in.

The Takeaway Regarding Consent

If you’re thinking that the concept of consent as it relates to children sounds like treating kids as if they’re little adults, then you’re catching on. Children deserve as much respect as grown-ups, but of course they need boundaries as well.

It’s your job to strike the proper balance. Don’t worry, though. The reward of raising children who respect themselves and others will be well worth your efforts!

How do you embrace and teach consent in your home?

I enjoyed reading this. It is so important to have that mutual respect between parents and children!

YES!!! Consent is so important! I just got a book to work on this with my kids, so this article is great timing!

Oh, do you mind sharing what book you got? That sounds really interesting!