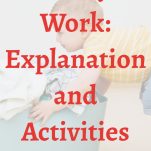 At first glance, the term “heavy work,” may resemble an occupational hazard. A closer look at the label reveals its usefulness as an important Montessori concept, however.

In this post, we’ll take a close look at heavy work, including its definition, benefits, examples, and more.

What Is Heavy Work?

Heavy work sounds self-explanatory, but it actually has a fairly scientific definition.

Understanding exactly what heavy work is and how it benefits children can give you a better foundation for implementing these types of activities into your Montessori routine.

So just what is “heavy work,” anyway? Heavy work refers to any activity that engages a child’s gross motor skills.

Examples include kicking or throwing a ball, running, jumping or balancing on a beam, for instance.

Heavy work stimulates one of our lesser-known senses called proprioception.

Proprioception is sometimes referred to as the “sixth sense,” and it is defined as our awareness of the body’s movements and its orientation to the things around it.

Without proprioception, we would be unable to navigate the world or manipulate the objects in it.

Here’s how proprioception works: as our bodies move, receptors in our joints and muscles send signals to our brain, which in turn sends messages back to the body telling it how to respond.

This is how we can run in a straight line without constantly looking at our feet, and it’s how we instinctively know how much effort is needed to pick up a brick as opposed to a tissue, for instance.

All of this communication between the brain and body happens within milliseconds and is virtually effortless. In this way, proprioception is kind of miraculous.

Problems or deficits in proprioception can cause general clumsiness, poor posture, an abnormal gait, or any number of other issues that affects one’s control over his or her body and its movements.

Proprioception is like any other sense in that it is stronger in some children than in others. Unlike some other senses, though, proprioception can be improved with practice and physical therapy.

The Case for Heavy Work

Even the most well-intentioned parents get caught up in fostering children’s mental and intellectual growth. Of course, this is a very important aspect of your youngster’s development!

It’s easy to forget about other crucial aspects such as learning to move and control one’s body, though.

Perhaps that’s because it’s such a basic concept to us grown-ups that we tend to take it for granted.

The truth is, though, that body movements are not only important in and of themselves, but they also contribute to a child’s intellectual and (eventually) academic development.

Researchers have demonstrated again and again that mind and body are connected. Virtually nothing happens within one of these realms that does not affect the other.

According to sensory integration theory, activities that stimulate our proprioceptive sense have an interesting effect on the brain—they help to calm and organize it. In turn, we become less anxious and more receptive to learning.

This is why heavy work is often recommended prior to introducing new concepts or asking children to complete tasks that require high levels of concentration.

Indicators of the Need for Increased Heavy Work

Given the freedom and space, most toddlers and preschool children will naturally engage in heavy work activities.

Young children love to run around freely, climbing over and under things.

They routinely throw and kick objects, try to pick things up, and otherwise interact with their environments. This is normal activity for the majority of young children.

Some children need more proprioceptive input than others, though.

Plus, certain environmental factors such as too much television or a lack of space to roam and play, for instance, can create less than desirable conditions for optimal proprioceptive development.

If you’re observant, though, you’ll notice that little ones have a way of letting it be known that they require a bit more in the heavy work category.

Here are a few signs to look for:

These are just examples. There may be other ways a child attempts to communicate the need for more heavy work or proprioceptive stimulation.

Note too that some of these behaviors could be interpreted as acting out or “misbehaving,” when in many cases they represent a simple need for sensory activity.

It would be impossible to provide an exhaustive list of heavy work activities for toddlers and preschoolers. There are simply too many to name!

Instead, we will list some of our favorites below.

Use the ones you like and also be inspired to create your own activities custom-made for your little one. After all, you know your child better than anyone!

Nearly any activity that includes movement of the large muscle groups can be considered a heavy work activity.

Activities that require pushing or pulling are especially helpful for some children.

As you incorporate these heavy work activities into your home routine, you’ll likely begin to see some exciting changes in your little one, both cognitively and behaviorally. Good luck!