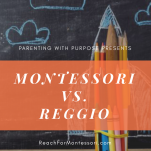 You’ve narrowed down your choices to Montessori vs Reggio. Making your final pick is a personal choice, and they are both wonderful methods.

Since you can only pick one, I’m going to help you eliminate one.

First off, what is the Reggio Emilia approach? And what are its similarities to Montessori?

Similarities between Montessori and Reggio

Reggio Emilia is an educational philosophy that, in fact, has roots in the Montessori Method. This is the reason for the striking similarities. It’s also the reason many parents have narrowed their choices down to these two methods.

Prior to the start of World War II, Dr. Montessori defied Mussolini’s ordered to have her teachers take a fascist oath and Benito Mussolini ordered all Montessori schools to be closed.

Teacher, Loris Malaguzzi, the creator of the Reggio Emilia method, by request of the people of Reggio Emilia, Italy, picked up where Dr. Montessori left off. He provided them with an alternative to traditional education.

With Reggio, children engage in open-ended projects alongside teachers and are encouraged to express themselves using the “100 Languages”, that is, throughout many different mediums.

Montessori and Reggio: The similarities

The biggest similarity between the two methods is they both consider children capable and worthy of respect.

Montessori vs Reggio: The diffrences

What are the key differences between Reggio and Montessori?

Reggio schools have children building a community within the classroom. Parents, teachers and administrators play an integral role in communication with each other for the betterment of the child.

In Montessori, everything a child learns comes with lessons on interconnectedness with their immediate surroundings, as well as how their actions effect those in other communities and other parts of the world.

Below is a chart that highlights four key differences between the two approaches.

This comparison was a lot of fun for me to write! I love Montessori, but there are some other alternative methods of learning that have a lot of positives for me, as well!

I have read that, as far as alternative methods to education are concerned, Reggio and Montessori share the most similarities. So far, I agree.

There are other methods of education that are less similar to Montessori.

I’d like to add, one of the biggest misconceptions I’ve come across when I hear people compare these two methods is that Montessori focuses on the individual, while Reggio focuses on the community. As you can see in this comparison, that is false.

Both methods focus on the child within the community, just in different ways and scopes.

Out of the two methods, Montessori (in my humble opinion) is the most versatile, simply because a child could go to a Montessori school in a different country and receive the same global education.

As well, a Montessori teacher is not limited by her community.

A Montessori teacher’s training would have her fitting into any Montessori school in any community without her having to learn the community in the classroom, as well as the adjunct community of teachers, parents, administrators, and elected officials.

I hope this was helpful in your decision-making!

Montessori or Steiner — The Montessori-Minded Mom

[…] are all amazing methods, but they do have differences. I will compare Montessori and Reggio in another post, as well as discussing Mason. Right now, I’d like to help you make the […]

Montessori or Steiner — The Montessori-Minded Mom

[…] are all amazing methods, but they do have differences. I will compare Montessori and Reggio in another post, as well as discussing Mason. Right now, I’d like to help you make the […]

Thanks for this! It was super helpful to see the two methods alongside each other, even though I know a lot about Montessori already (and currently learning) it was interesting seeing the two methods broken down like this.

I'm glad you enjoyed the read! I see more similarities between Waldorf and Reggio, but that's not the choice many are faced with, since Montessori is more popular than Steiner.