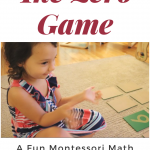 How Montessori teaches the concept of zero: The Zero Game

Montessori math activities focus on associating quantities with their corresponding numbers. This is where the Zero Game comes into play.

The progression goes like this: Children first work with quantities, then move onto the symbols, and finally come to understand the association between the two.

The Zero Game is one of a child’s first introductions to associate the abstract concept of zero.

Early Montessori math activities focus heavily on the numbers 0-9. The reason for this has to do with future decimal system work, which we will discuss in a later post.

What is the the Zero Game?

At the point when number symbols are being learned, there is a game that children really enjoy. It’s called The Zero Game.

This game reinforces the concept of zero, as introduced in the pre-requisite materials, such as the Spindle Boxes.

This game is a lot of fun for the children and it also has character building elements to it. When the child picks the zero card, she must not participate in the action, which is sometimes a difficult thing for children.

How cool is that? A fun game that teaches math and patience!

We play this game with the Sandpaper Numbers. However, I don’t believe that is entirely necessary if you are doing Montessori homeschooling or unschooling.

Cardstock with written number would suffice. The element of muscle memory from tracing the numbers would be absent, but the child would still benefit from every other aspect of the game.

Also, there are many Montessori homeschooling parents that choose to make their own Sandpaper Numbers. That is another option, if purchasing the materials isn’t in your budget.

How to play the Montessori Zero Game

The Zero Game is so easy to set up. You simply place the Sandpaper Numbers face down and ask the child or children to pick a number and turn it over.

If she already understands the concept of zero, you can remind her that zero means nothing.

To spice this game up a bit, instead of clapping, the child or children can do a number of other motions! You can add the element of gross motor activity, if you feel like the child could use a little extra movement at the time of the game.

They can pat their knees, jump up and down, stomp, ect.

And, of course, after every Montessori activity, remind the child to put the number cards back in the box and return them to their place on the shelf.

I hope you enjoy this fun Montessori math activity! We sure do!

1 thought on “The Zero Game: A Montessori Math Activity”