Risks are good: The dangers of helicopter parenting

I am a pretty free-range-ish parent. I know it's the popular thing to do right now; to judge people who parent differently.

So, I want to start off this post by saying that I can't stand the term “helicopter parent”. I think it's mean spirited and does nothing but further divide parents (mothers, specifically). Labeling a woman as an object dehumanizes her, relieving other women of their guilt for judging. But, for lack of a better term, I'm going to use it here and there.

So, sorry for that.

Because parents really do need to know about the dangers of helicopter parenting. 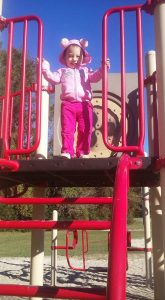 I see it a lot when I take my kids to the playground or to the park. Parents mere inches away from their child for the entire duration of their stay, warning them, explaining things to them, and helping them.

Not only does it look like its way more work than they need to be doing, the kids don't really look like they are getting a lot of choice in the activities or having as much fun as they could be having. (Like the fun we used to have at the playground when we were kids.)

If my mom parented me this way, I would have been absolutely miserable, but I am guessing a lot of kids these days are just used to it.

Because you know those benches at the playgrounds?

They are for us.

The play equipment is for our kids. We sit, they play. 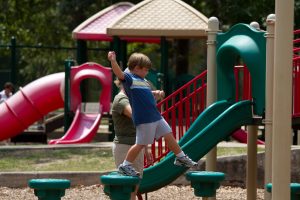 If you've ever experienced anxiety or had an unreasonable fear that something bad was going to happen, multiply that by 1,000 and apply it to your child…that's what some parents are feeling. That's why they hover and warn and instruct.

It's hard for me to imagine how it must feel to dread an injury or worse for your child.

I admit, I had a bit of anxiety when my first child was a young toddler and I was guilty of some hovering.

Is the world really more dangerous than ever?

The over-protective, hovering style of parenting is fueled by a mixture of, not only anxiety, but access to endless information on the internet. In the age of social media, we are ever more aware of crimes against children and tragic accidents involving children.

The fact, though, is that child abductions are less common than they have ever been. (Also, it's important to note that a child is more likely to be abducted or harmed by a family member or close acquaintance than a stranger.)

We just hear about these things more, thanks to social media sites and the sensationalist media.

As far as those freak accidents with tragic consequences are concerned, some things just can't be foreseen and prepared for. These things have always happened.

Again, they just seem more common than they really are thanks to social media.

I don't know if I'll change any minds or hearts with this article, but I'd like parents to hear me out.

Is it good to let my child climb and jump from high places?

Taking risks is good for kids and hovering is doing them no favors. In fact, you may be negatively impacting them in some major ways.

Risk has been defined as “a foreseen occurrence that combines the probability of occurrence of harm and the severity of that harm as perceived by the intended user (of playground equipment)”.

In a Montessori environment, you will see children cutting with knives, using metal cutlery at young ages, pouring and drinking from glass wear, and hammering real nails into real stumps. All of these things come with risks.

Essentially, allowing risky behavior is Montessori-aligned and hovering and helping when unnecessary is not.

What is risky play?

Studies show the benefits of letting kids take risks while playing outside are numerous and some even lifelong. So, what are these benefits?

The dangers of helicopter parenting

Inversely, the lack of risky play is associated with:

Not only does the lack of risky play have negative effects, but the cause of it (“helicopter parenting”) has been linked to anxiety in children.

Yep! All that fear and anxiety some parents feel; their children have a high potential of growing up to feel the same way.

Other reasons parents don't want their kids to take risks

There are certain risks that parents avoid due to legality issues, like letting their child wander free and explore. Unfortunately, this day in age people don't delight to see children independent and free to play where they please.

If you let your children be seen without you, it's always a risk that a concerned person is either going to think your child is in trouble or is going to cause trouble. In this way, our society actually encourages helicopter parenting.

Also, particularly in America, healthcare costs are often a factor in how much risk parents let their kids take while playing. In countries like Germany and Sweden, a fractured wrist isn't going to put a family into financial crisis.

Here, in America, not everyone has health insurance and many of the people who are insured have extremely high ER deductibles and/or co-pays. The irony lies in the fact that children in Germany and Sweden are less likely to injure themselves during risky play.

Because risky play is associated with an increased ability to navigate risks and avoid injury. 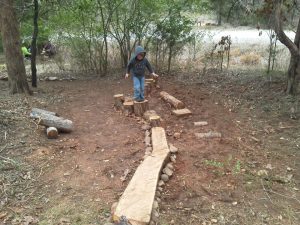 So, give the leash a little slack, resist your inner helicopter parent, and let your kids take some risks!

Not only will they probably be just fine, they'll be better for it!

What degree of risky play do you let your kids experience? What are your fears for your child when it comes to outdoor play? Do you think you might be a helicopter parent?

Agree or disagree, I'd love some feedback!

Love, love, love this post! It’s so terrible when parents hover and create anxiety in their kids. It’s never a good thing. Let them play, explore, get minimally hurt. When I think about the crazy things I did as a kid, my heart stops sometimes. But it was so much fun.

I absolutely love this. I feel the exact same way about kids taking risks. I really enjoyed reading this

Oh, I love this so much! I am also a free range-ish parent. I completely understand the anxiety that comes with our vulnerable children, but I try to pick my battles very carefully with my children so that they KNOW when I mean business (looking both ways before crossing the street, not touching electrical sockets, etc). I don’t want my children growing up terrified to move or take risks. Balance. Isn’t that what we all want for our children? I also agree with you that social media has made us all a little bit more afraid because we know more about tragedies around the world

Why Does Montessori Use Glass Dishes Instead of Plastic? — The Montessori-Minded Mom

Essential Montessori Books for you to Read — The Montessori-Minded Mom

[…] important quote for those parents who tend to hover and instruct. I’ve done this in the past and I can’t deny that my own vanity had something to do […]