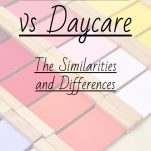 Deciding on Montessori vs daycare is a big choice and it’s good to know the differences and similarities. The schedules, noise levels, cleanliness, and type of education is different across the board.

Montessori vs Daycare: Differences, Similarities, and How to Choose

As a parent or guardian, it’s natural to wonder about early childhood education. Whether you are looking to give your little one a head start on their schooling or need a caregiver while you are at work, you may have questions about Montessori vs daycare.

These two facilities may look similar, yet they are very different. Here are a few things to consider before you send your child to either one.

At first glance, Montessori schools and day care seem very much the same. They both cater to younger children and have lower teacher/student ratios than classrooms meant for older ages.

Both environments have age-appropriate toys, and children are left at the facility to be monitored by a teacher.

Beyond those resemblances, there are a vast number of differences. They may not be noticeable at first, but these inequalities are essential to take into consideration when you are trying to choose a program for your child.

The Montessori style of teaching started at the turn of the 20th century, and it’s beginnings had roots in allowing the child to guide their education. There is a lot of play and monitored self-discovery, which looks a lot like what goes on in traditional day cares.

Children in a Montessori environment are encouraged to be themselves and follow their interests, even at a young age. Students can move along at their own pace of discovery, and if you think about it, it’s quite a natural process.

Consider babies. Some walk at nine months and others start walking at 14 months, but – unless there is some medical issue – both the early and late walkers will be mobile someday. It wouldn’t be fair to keep a nine-month-old baby still until the 14-month-old baby caught up.

Conversely, it could be harmful to the 14-month-old baby’s psyche if they were prodded and forced to keep up with the earlier walkers. When it comes to learning, Montessori allows both early and late learners to move at their own pace, which leads to self-confidence and mastery.

In a daycare setting, there is more of a one-size-fits-all approach. Children are grouped by age – sometimes in six-month increments – or by stage – crawlers, walkers – which forces children to fit into a mold that may not be right for them at the time.

Daycares function on a stricter schedule than Montessori schools. Children in the daycare setting funnel through activities doing certain things at specific times.

What happens if they want to play with a toy a bit more or were just about to figure out how to put that last piece into the floor puzzle? They won’t get the chance to finish.

Montessori allows children to move between activities at their own pace, spending more time on what interests them and being able to move on quickly if they’ve mastered a concept. This setup may seem appropriate only for grade school, but babies are also capable of play and moving from looking at books to stacking blocks or observing their environment.

Giving children the time and space to have flexibility within a Montessori setting is ideal.

Daycares tend to be noisy, which can cause children to be unfocused at times. Disorderly play also results in messes that need to be managed often.

Because Montessori programs concentrate on the whole child and their thought processes, they tend to be quieter, cleaner, and more focused areas to foster the mind of the child.

Unfortunately, many daycare centers have low wages and minimally trained staff, which results in a high turnover. This lack of continuity isn’t ideal for young children.

Montessori teachers are trained in the practice, which results in educators who believe in the philosophy of child-led learning.

Because it’s a lifestyle and not merely a paycheck, teachers tend to have longevity. Consistency benefits the children as they see a consistent face.

Still, it helps the parents as their child’s educator stays in tune with that particular student’s learning style, abilities, and interests.

The same goes for the administration of the Montessori environment as they are also familiar with the methods and philosophies that will give your child a good head start.

Intentionality is a big one when considering Montessori vs daycare. Children can start learning formally at an early age, and in the Montessori environment, each activity, learning center, and toy has a purpose in guiding the student towards higher thinking.

In a daycare environment, there is monitored free play. Yes, children can – and do – still learn from open play, but it is incredibly intentional in a Montessori environment.

An earmark of the Montessori program is focusing on the child as a whole, and that includes using positive discipline. Instead of putting a child in time out or merely taking away a toy as in a daycare setting, Montessori students learn about the behavior behind what they are doing.

If a student is hitting another student with a block, the Montessori teacher will not only remove the block, but they will talk to the child about why that action is wrong, how it could harm the other child and ways to deal with that in the future.

Additionally, the teacher will try to focus on why the behavior occurred. Maybe the child was frustrated, or the other student decided to take the block away. Reasoning and critical thinking are introduced from a very young age, which results in more confidence and a way to think about the consequences of their actions.

Montessori vs Daycare – Which Is Better?

Montessori environments are more purposeful and have an end goal in mind, whereas some – but not all – daycares can be a glorified form of babysitting.

Childcare facilities differ. Not all Montessori schools are the same, and all daycares were not created equal.

The best thing to do when considering Montessori vs daycare is to visit your local facilities.

Talk to the administration and the teachers about their philosophies. Visit the classrooms to see what kind of educational activities and toys they have. Chat with other parents about their experiences.

No matter where you choose to place your child, it’s best to make an informed decision to set your student up for a positive experience.

Cheers and remember to subscribe to keep up to date!

1 thought on “Montessori vs Daycare: What is the Difference?”