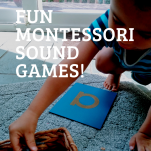 These words she hears will give her important communication tools! So, don’t rush into sound games, even.

Trust that your children are getting the foundation of literacy from everyday activities.

But what about written language and reading? What are the first steps in guiding a child into this next sphere?

The Montessori way of introducing letters is much different than traditional education. Montessori bypasses recitation of the alphabet and goes straight to the sounds the letters make.

This is first done through sound games. Sounds games are fun and, like all other Montessori activities, they involve multiple senses.

What are some Montessori sound games?

Letter Sound Hunting is a super fun sound game. It’s a bit of a hide-and-seek game, but using small objects instead. Here’s how to play:

It will be helpful to have the corresponding Sandpaper Letter, Movable Alphabet letter, or even just the letter written on a slip of paper. This is to help him make the connection between the letter sound and the letter symbol.

Think of an Animal

Young kids love animals! So, naturally any sound game involving animals is going to be a hit. Here’s how to play:

The great thing about this game is you can play it in the car, at the park, while tucking them into bed, at the dinner table…anywhere! No special materials or objects needed!

There are many ways to play I Spy. In a Montessori environment, I Spy is often played using sound pouches. We will go into this game and all its presentations and extensions in a separate article, as the explanations can be quite lengthy and I want to focus on simple and fun Montessori sound games in this post.

This is another game that can be played anywhere and requires no materials to be purchased or crafted.

If you want a slightly more formal presentation, here’s how to play:

Sound pouches are small pouches with a letter on the outside.

In a Montessori classroom, sound pouches for each letter are available. For most of us homeschooling parents, this may not be practical.

Velcro letters could be purchased or fashioned, then stuck to a single pouch as needed. What we do in our Montessori home is use letters from our Small Movable Alphabet. Here’s how you play the game:

Observe your child for his interest in the sound pouch (or pouches, if you choose to make more than one or purchase a full set), and offer more letter-sound pouches as he is interested.

This is one of the simple Montessori sound games that not only aid your child in mastering letter sounds, but it helps their classification skills, and visual discrimination (very important for reading and writing), as well! Here’s how to play:

Show your child how he can check his own work by stacking the two letters on top of one another to see if they match up! This way, you can rotate out the letters in the basket and he can work on his own after he has a grasp on the letter sounds.

So, skip the ABC song for now. (Read about rote memorization here!) There isn’t a need for a child to learn alphabetical order straight away.

The Montessori path to literacy in the primary years starts with sound games.

I hope you found this article informative and I hope you enjoy these games with your child!

Why does Montessori Teach Writing Before Reading? — The Montessori-Minded Mom

[…] with implementing Montessori with my own child, is that she took the sounds she learned in our sound games and applied them to […]

What are Sensitive Periods? — The Montessori-Minded Mom

[…] can help their children at this time by playing sound games and by introducing materials, such as the Small Moveable […]

What great ideas to teach kids sounds. My son naturally took to wanting to learn all the letters and sounds. We very much did and still do games of what starts with this letter or that letter. What sound does this letter make. Or when he asks what letter something starts with, we give him the sound.

All of these are really good ideas. I love the letter symbol matching.

I love this! I have 5 kids, so I have a child in basically every age group ?. I’ve also worked with children for a greater part of my life. This is all such great information to have and has given me so many ideas! Thank you