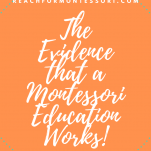 So, we know how Montessori works. But is there any evidence that a Montessori education works better than a traditional education?

Well, there are the successful people who attended Montessori school at some point in their educational careers. Here is a list of just a handful of Montessori success stories:

That’s quite a list! These folks are/were innovators and creative geniuses!

But this proves very little, if not, nothing at all. There are so many successful people who received no Montessori education at any point in their lives.

So, where is the evidence?

The actual evidence that a Montessori education works

This is major topic of conversation in the Montessori community! We know about the Montessori success stories, but where is the actual evidence that a Montessori education is better than traditional schooling?

I’ve done some extensive research (of the research) in this topic and I’m happy to share it with you! It turns out there are scientific studies that prove pretty conclusively that a Montessori, or Montessori-styled, education is the way to go!

There are several studies that prove Montessori learning, at any level, provides children with an academic edge!

The study featured below is longitudinal and showcases the differences academic achievement in children who attended Montessori vs. traditional schooling a full 5 years following children’s transition from Montessori to traditional public schools.

“In essence,” the study found, “attending a Montessori program from the approximate ages of three to 11 predicts significantly higher mathematics and science standardized test scores in high school.

The below study focuses on math interventions utilizing manipulatives. If there is a doubt in your mind that the Montessori method of learning math is the best foundation for mathematical understanding, this is a must read.

The results of an attitude survey showed students improved in enjoyment, perceived knowledge, and confidence in solving multiplication problems.

Below is a brief synopsis of a study that takes into consideration income levels and community diversity in students.

East Dallas Community Schools operates two inner-city Montessori schools that serve an ethnically and culturally diverse group of primarily low-income families. In over 30 years of using the Montessori approach to education, EDCS has proved that all children, regardless of race or income, can succeed in school when you start young and involve parents.

The author concludes that children that attend AMI Montessori schools perform well above the rest.

Researchers compared Montessori students with students in other school programs, and found that 5-year-old children who completed the three-year cycle in the Montessori preschool program scored higher on both academic and behavioral tests than the control group.   The study also found that 12-year-old Montessori students wrote more sophisticated and creative stories and showed a more highly developed sense of community and social skills than students in other programs.

Another great study, this one comparing learning outcomes in children from traditional middle schools to children who attended Montessori middle schools.

This study compared middle school students in Montessori programs with students in traditional middle schools, and found significantly higher student motivation and socialization among the Montessori students. “There were strong differences suggesting that Montessori students were feeling more active, strong, excited, happy, relaxed, sociable, and proud while engaged in academic work. They were also enjoying themselves more, they were more interested in what they were doing, and they wanted to be doing academic work more than the traditional students.”

The following is a thorough study and not entirely specific to Montessori (though Montessori students were sampled).

To be successful takes creativity, flexibility, self-control, and discipline. Central to all those are executive functions, including mentally playing with ideas, giving a considered rather than a compulsive response, and staying focused.  This review compares research results from various activities and curricula that have been shown to improve children’s executive function, including computerized training, aerobic exercise, martial arts and mindfulness practices, and classroom curricula including Montessori education. In a comparison of curricula and curricula add-ons, the Montessori approach is shown to meet more criteria for the development of executive function for a more extended age group.

This is commentary, and not specific to Montessori learning, but it is a must-read if you want a better understanding of why Montessori schooling is more effective than traditional education programs.

Not only does the author explain how children learn best, but she goes into the obstacles to learning that are present in traditional classrooms, such as stress, isolation, and data-driven measures of academic success.

Dr. Adele Diamond, Professor of Developmental Cognitive Neuroscience at the University of British Columbia, is one of the world’s leading researchers on the development of cognitive function and a supporter of Montessori education. In this article she discusses effective strategies for advancing academic achievement, and advises: “Programs that address the whole child (cognitive, emotional, social and physical needs) are the most successful at improving any single aspect – for good reason. For example, if you want to help children with academic development, you will not realize the best results if you focus only on academic achievement (though at first glance doing that might seem the most efficient strategy); counterintuitively, the most efficient and effective strategy for advancing academic achievement is to also nurture children’s social, emotional, and physical needs.”

So, are these Montessori success stories proof that parents who can afford, or who are motivated to find free or affordable Montessori programs, tend to do better or be more involved with their children at home? Or does all this prove that Montessori schools do the trick when it comes to education?

With the upcropping of public and charter Montessori schools granting access to a Montessori education even for the working and struggling classes, time will give us a more definitive answer.

For now, though, the evidence we have tells us that a Montessori education works! Each study and commentary listed in this posts does corroborate the findings of the others’.

One thing is certain, though. Traditional education is proving to be flawed and cuts to recess time and the arts are not helping matters. Neither is the shift to technology-based learning.

Children learn best through experiences, not by sitting still at a desk or using educational apps.

I’d love to get some feedback on this!

24 thoughts on “Evidence that a Montessori Education Works”