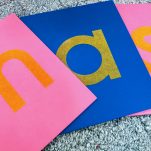 How do Sandpaper Letters work?

If you’ve done any reading of Dr. Montessori’s, you’ve likely come upon some of the brain-bending genii that inspired her to design the Sandpaper Letters. If you haven’t, you might be still wondering, “How do Sandpaper Letters Work?“

Before we get into the introduction of the Montessori Sandpaper Letters, let me give you one of the most thorough explanations of this material, right from the Good Doctor herself:

“Tracing the letter, in the fashion of writing, begins the muscular education which prepares for writing…Touching the letters and looking at them at the same time, fixes the image more quickly through the cooperation of the senses. Later the two facts separate; looking becomes reading; touching becomes writing.” -Maria Montessori (The Montessori Method)

The Montessori Sandpaper Letters follow the sound games. They are the first concrete representation of a sound-symbol association. They give your child a visual representation, as well as a tactile (touch) impression of each letter symbol.

Along with these senses, comes the auditory (sound) impression your child gets when they here the letter sound as they trace it with their finger.

(This post contains affiliate links. Purchasing from these links costs you nothing extra, but sends a few cents our way for website upkeep.)

The Sandpaper Letters are definitely the cornerstone of the Montessori language arts materials. As explained above, this material is experienced through multiple senses.

This takes children beyond a visual recognition of letters and into a deeper understanding through a more thorough sensorial impression.

Most of the English language is phonetic, which makes learning the alphabet phonetically, instead of by the letter names, most crucial. A child simply cannot sound out a word without knowing the sound the letter produces.

This differs from traditional learning. Children who learn the names of the letters are really at a disadvantage when it some to learning how to read and write.

Montessori children learn quickly that words are simply a sequence of sounds to put together. This makes writing and reading make much more sense for children who learn their alphabet the phonetic way first.

The Sandpaper Letters have the vowels in blue and the consonants in red to correspond to the colors in the Large and Small Movable Alphabets.

The precursor to the Sandpaper Letters in a formal Montessori setting would be the Touch Boards and other Montessori sensorial materials. These materials are quite useful for the Montessori homeschool environment.

These letters are introduced prior to the Sandpaper Numbers and are typically used at a table instead of a rug. This is to make it so your child doesn’t have to lean over and can focus better on the sensation of tracing the letters.

How to introduce the Sandpaper Letters at home

Here is a list of the order in which the Sandpaper Letters should be introduced:

The Double Sandpaper Letter should be introduced as follows:

The following summarizes how to introduce the Sandpaper Letters:

On another day, introduce three more letters, making sure to review the previous letters, until the alphabet is complete!

Your lessons should be short and sweet; as much as your child can handle.

How Sandpaper Letters work in Montessori is nothing short of amazing. Giving your child the extra brain-boost of learning their letters using muscle memory and tactile sensation is part of the magic of a Montessori education!

[…] will be helpful to have the corresponding Sandpaper Letter, Movable Alphabet letter, or even just the letter written on a slip of paper. This is to help him […]

Why does Montessori Teach Writing Before Reading? — The Montessori-Minded Mom

[…] Sandpaper Letters give the child a mental and physical impression of letter shapes, preparing them for […]