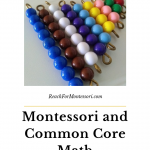 I was recently thinking about the Common Core standards that have been implemented in our public schools here in the United States.

You see, my daughter has expressed interest in attending public school next year. After doing all of these wonderful Montessori math activities at home, I was wondering if she would be prepared for Common Core math.

What is Common Core math and is it of any relation to Montessori math?

Parents seem to have mixed opinions about it. So, I decided to go to an expert to find out if the Montessori activities we do at home will prepare my daughter for public school’s Common Core standards.

I contacted Dr. Theresa Brons for some answers.

Now, before you go thinking I picked some yokel or Google Ph.D to explain Common Core to me, let me give you her credentials. Dr. Brons holds a B.A. in Psychology, and M.A. in Mathematics, and a Ph.D in Pure Mathematics.

She also studied algebra under Daniel K. Nakano and taught many future educators of Common Core under the guidance of Dr. Sybilla, one of the content developers of Common Core.

Dr. Brons offered a brief explanation of the philosophy behind Common Core:

“The developers of the Common Core math standards were motivated by a desire for children to develop a strong intuition about numbers and their inter-relationships. Anyone who teaches math understands the importance of memorization of facts and algorithms as students advance, but the child that has no intuition will never develop confidence in math…”

Hmmmm…sounds familiar. Montessori doesn’t introduce the memorization of math facts until later after physical quantities have been introduced.

Brons’ description of Common Core seems to mesh with Montessori, in that it encourages play, rather than rote memorization:

“Common Core encourages play and exploration to encourage the development of intuition. For example, students are taught the standard algorithm for addition, but they are also encouraged to play with and explore several other algorithms that, though more time-consuming to perform, can be demonstrated with toothpicks or blocks.

Taught well and with patience, this helps demystify why the standard addition algorithm works and shows the beauty of the base-ten number system children are learning.”

The base-ten number system, like the Golden Bead material and the Number Cards…I wondered also about other activities, like my children’s favorite toys; Magna-tiles and wooden blocks.

Brons described several Common Core activities, in addition to the ones I’m familiar with:

“Math is not taught in a vacuum. Children benefit from a strong intuition about quantities, shapes, etc. in their environment.

For example, if a child has plenty of experience making shapes by folding paper, geometric toys, or even yarn, they’re going to have a much easier time 10 or 15 years later when they’re expected to create mathematical models for 3-d situations in their calculus class.

Another crucial skill that children usually develop pre-school is the idea of columns and rows. Children who play with stacking blocks (like Legos or Duplos) can’t successfully play with the toy until they intuit that the blocks can only stack in certain ways and that if they want to completely cover a large piece of tile with blocks, they need to lay the blocks out in an array of rows and columns.”

Transitioning to public school and Common Core  after Montessori

After my conversation with Dr.Brons, I felt loads better about sending my firstborn to public school! And, to tell you the truth, I felt a little disappointed with the way I learned math.

I wonder if I had been able to experiment; take the long way, get the wrong answer, if I would have enjoyed math more and done better at it.

It seems as though Common Core math can actually build upon a Montessori math foundation. Both methods focus on discovery and exploration, rather than on getting the correct answer. They both emphasize the process, and that keeps kids engaged and encourages the love and enjoyment of math!

Ann Pilzner, who heads a public Montessori School in Michigan and writes for the website Montessori Rocks, says, “The Common Core goes beyond memorization or basic understanding. It requires the child to apply their knowledge to solve problems.”

Ms. Pilzner continues on to tell us that Common Core emphasizes practice. Much like a child will work with Montessori materials repeatedly, and in different ways, a child will do the same with Common Core math.

So, you see I am glad my daughter will get this opportunity and I’m glad her experience with our Montessori materials has given her the idea that math can enjoyable.

I would love to hear some of your thought on this!

This is awesome! I love how helpful this is.

Very cool! I love reading about new learning methods. I'm considering homeschooling my son and these are great tips!

As a teacher common core was so difficult to adjust to when it first cane out but now I love all the hands on manipulating and different strategies it has you use to solve a problem.

So glad to hear it's grown on you! Dr. Brons was telling me how resistant many teachers were to learning the new method.

never heard of the golden bead material way. Very intersting. My son does very well in school but nothing wrong with using new methods.

Great tips! I will totally use this for my kids